In 1796 Jacques Réattu came to live and work in Arles. He used his studio for his own work and dreamt of creating the "Atelier du Midi" (Workshop of the South) there, an idea that still lingered 60 years after Van Gogh. The Dutch painter had sent for Gauguin to take part in the establishment of this Atelier du Midi. Whilst here Gaugin painted 'L'Arlésienne". Picasso, a great bullfighting enthusiast, regularly came to Arles, where he had many friends. Through their work, these artists have greatly contributed to making Arles know around the world.

Van Gogh's spirit is omnipresent in the city. Other painters, such as Leo Lelée have come to Arles to find  inspiration for their work.

Many painters, living in Arles today,  also continue to find their inspiration here.

It was at a ball for former Arts déco students that Lelée met the watercolour painter and sculptor, Count Gaston de Luppé. He had a roomy studio in Arles and spoke to Lelée of his country, of Arlesian women, their costumes, the sun and of the magic of Provence. Lelée, captivated and full of enthusiasm, left for Mistral's country which would make his fame. In Arles, Frédéric Mistral met him, and having seen him at work and considered his drawings, they became close friends. Léo Lelée thus became the official painter for the city of Arles.
More information on : http://leo.lelee.free.fr 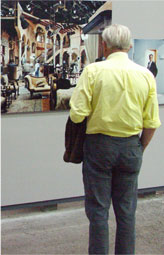 Various galleries are open all year round. A tour has been set to explore these whilst strolling around the narrow streets of the town centre. Other galleries open for temporary exhibitions and particular events (the Feria, Prémices du riz…)

In the spirit of the « Maison des Artistes » dear to Van Gogh, the Foundation has a unique collection of more than 200 art pieces by contemporary artists, tha pay homage to Van Gogh's universality.