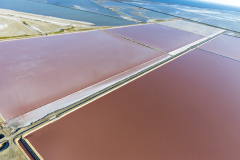 The village of Salin-de-Giraud is located to the south-east of the Camargue delta, in the town of Arles, 40 km from the city center. Located on the right bank of the Grand Rhône, it had 2,065 inhabitants in 2009.

The exploitation of salt dates back from the Neolithic period ! But it's at the end of the 19th century that the village of Salin-de-giraud has developed with the establishment of two salt companies, which resulted in a strong migration of foreign labor (Greeks, Spaniards, Armenians, Italians, ...).
In 1855 a chemical engineer from Lyon, Henri Merle bought 8000 hectares of ponds and marshes in order to supply sodium chloride and other salts to his exploitation of Salindres in the Gard..
In 1895, the Solvay company also settled in Salin de Giraud. The salt purchased from Merle establishments allows the fabrication of soda which is then transported to soap factories in Marseille by boat via the Rhône and the sea.

The vast area of the salt marshes is of great ecological and landscape interest. The development of a small number of invertebrate species provides abundant food for birds. That is the reason why lots of bird species choose the Camargue for nesting, including flamingos.
With the large (28 km !) wild beaches of Piémanson and Beauduc, Salin-de-Giraud offers to Arlesians and tourists a very popular seafront during the summer.

The beaches of Piémanson & Beauduc: Piémanson is a very beautiful sandy beach of nearly six kilometers, located west of the mouth of the Grand Rhône. Beauduc is the end of the world, a beach of seven kilometers of fine sand, a place out of time and forgotten by geographical maps.

Kitesurfing : The beaches of Piémanson & Beauduc have become one of the most beautiful kitesurfing spots in the south of France.

The Salt : Before the mouth of the Grand Rhône, when you head towards the beach, stop at the "point de vue du sel" (salt viewpoint) : you will see long white hills/salt mountains that we call here salt camels.
After it's been harvested in September, this white gold of Camargue is stored here. It is then shipped to chemical and food industries, or it is used to salt frozen roads in winter. The collection and exploitation of salt is an ancestral economic activity.

Camargue white gold has been stored there all year round since it was harvested in September. It is then shipped to the chemical and food industries, or to salt frozen roads in winter. The collection and exploitation of salt is an economic activity as old as the world.

- "a storytelling walk" in Salin de Giraud to learn about its industrial past.
- 3 hiking or cycling circuits: Les corons du sud, the sea wall, the banks of the Rhône.
- Guided tours to observe flamingos in the ancient salt flats with naturalist guides.
- La Domaine de la Palissade on foot or on horseback.

- Your bike for a free ride on a course dedicated to the heart of the saline. According to your desires, stop at the edge of the paths to appreciate the beauty of the landscapes, the salt tables in the middle of a typical Camargue fauna.
- Walk on foot - You will be at the heart of marvelous landscapes where salt has been harvested for centuries.
- Day pass - Discover an exceptional nature.

In Salin-de-Giraud and the surrounding area, the restaurants serve generous local cuisine on shaded terraces. Taste Camargue specialties and local products from the land or the sea: Discover the restaurants

The accommodation offer is multiple with two hotels, six guest rooms, ten furnished rentals and the "Les Bois-Flottés" campsite. Ideal for truly living in the Camargue! All the information and advice for a successful stay: Discover the accommodation

Discover the Salin de Giraud with your bike for a free ride on a course dedicated to the heart of the saline. According to your desires, stop at the edge of the paths to appreciate the beauty of the landscapes, the salt tables in the middle of a typical Camargue fauna.

Who are we? Our commitment mylexicon.engagementsresponsables Our quality policy Imprint Photos credits