To find out more

The pink flamingo is one of the 340 species of birds of the Camargue fauna. It is perhaps the most attractive one.

Since the beginning of the 70s, the largest colony of pink flamingos in the Western Mediterranean reproduces on a small island on the Camargue.

Scientists and nature-loving volunteers, have developped a vast program to protect pink flamingoes and offer them a comfortable home. The flamingo nesting site, which hitherto belonged to the Compagnie des Salins du Midi , since the end of 2008 has become on of the remarkable properties of the Academie du Littoral. While vigilance is always an issue to guarantee their reproduction, the colony living in the delta is exceptional and internationally recognised (10 to 15,000 couples each year). To observe the birds and their love dance without disturbing them, it is strictly necessary to take the advice and recommendations provided by the teams of the Camargue Regional Natural Park and bird protection associations. Free access is not authorised on the pink flamingos' nesting site to ensure the tranquility of this very apprehensive species. Guided tours are offered from April to September to discover this unique French site. 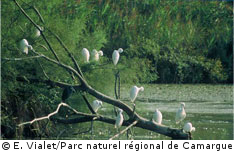 Among the 540 species of birds seen in France, three quarters of them have been sighted on the Camargue, where nearly 115 of them reproduce regularly.

It is the only area home to the 9 species of European herons (Great Bittern, Squacco heron, purple heron, etc), Pranticoles may observed here as well as the largest Glossy Ibis population in France (more than 300 couples). The limicolous laro, in particular Slender-billed Gulls, little sternes, common stilts, pied avocets are also species of great local value.

If the mating season is known for diversity of species, the cold season is characterised by quantity. Approximately 140,000 birds are present in the Camargue in the middle of the winter, including Eurasian Coots and about ten duck species (Common Teal, Mallard, Eurasian Wigeon, Northern Shoveler, Pochard …). The winter is also the best season to observe sea birds (Northern Gannet, Common Eider, Harles, Great Northern Loon,…)