The Camargue race and the bull-fighting scholl

The arena and of the School of razeteurs

Bulls and the Camargue Races

Spirit, intelligence and speed are main qualities of the Camargue bull... 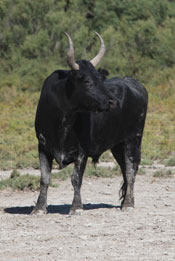 In the Camargue, more than everywhere else in France, the " biou" or bull is king. He is acclaimed as the hero of the Camargue race, which sets the rhythm in all the Bouvine villages from Easter to October.

... qualities which it expresses through the Camargue race or in the free race. The free race is an integral part to the traditions of the Camargue, it excites passions and moves the crowds.

Contrary to bullfighting, it is the bull is the centre of attention and not the bullfighter, even though some razeteurs are very well known. These bulls are the true heroes, and sometimes have long careers

Every bull has a name and this is written on the posters for the Camargue races, differing from the bullfights, where only the names of the matadors figure. Some even have a statue set up in villages like Goya, others like Rami, have a tomb in the farmhouse where they spent all their life.

Approximately 18 000 to 20 000 bulls are raised in 150 herds, of which atleast half have a staff of over 100 heads. Production Camargue breed ("diraco biou") is primarily intended to show bullfighting (camargue races, abrivado, bandido).